Posted on February 24, 2014 by jonathandumas

We had spent 2 out of the first 4 months of our journey in Florida. It was time to leave the sunshine state! So after a final farewell surge of icing rain that shut down the roads, schools and airports, we were able to venture on to the next states of our endeavor! And how rewarding it was to cross the narrow ends of the Gulf states, seeing borders fly by as we headed West! First in line… ‘Bama!

Having grown up with Forrest Gump as one of my favorite movies, I was really looking forward to hearing the local accents. And in towns such as Bayou La Batre, they did not disappoint! Furthermore, Alabama offered us some beautiful views, crossing the Mobile Bay, riding along the white sands of the shoreline (which attract the wealthy from the bigger cities of the state… we’re not the ones who came up with the term redneck riviera, I promise). And some great encounters with hosts who kept us out of the cold nights.

A little note on the term redneck. After hearing it so often, we figured we needed to get somewhat of a definition of who these folks are. So here’s what various hosts and people told us would fall into that category: people with a strong accent, living in the country, wearing camouflage, with a mullet hairdo, carrying guns, with a few missing teeth, and with “a family tree that doesn’t branch too far”… We still haven’t found anyone who fit into all those categories, but we’re not giving up on our search! 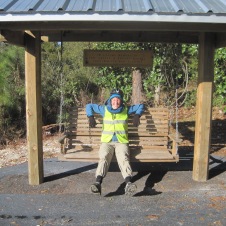 A short break on our race to catch the ferry across the Mobile Bay. We need one of those benches when we get home 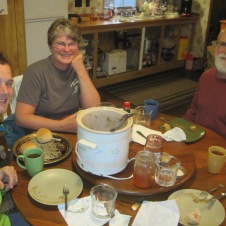 Venison stew with Scott and Rhonda…

Cruise across the Mobile Bay, with panoramic views of the gas rigs 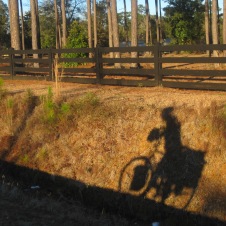 Our shadows struggle to keep up with us

Linda, enjoying the cake of the GED graduation ceremony that her parents organized 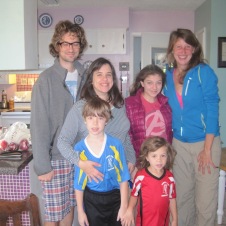 The whole gang before going to soccer on Sunday morning! Ric, Kim and their kids Lily, Liam and Linda

Flying back to mainland Alabama 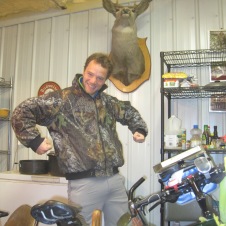 Me in my mancave

We decided to subscribe to our new favorite magazine

And for those who were interested in the shrimping business in Alabama… here’s a little something we learned!